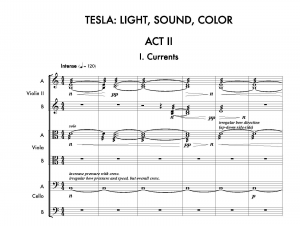 In the 1950s, when Max Mathews and colleagues were busy creating computer-assisted music with their MusicN series at Bell Labs, understanding the various components of sound was important for electronic sound synthesis (Chadabe 1997). Today, there are vast numbers of digital tools and methods for mapping data onto sound, but the parameters of sound are quite the same, and the choices of mapping are still very much designed. It’s important in sonification to remember the fundamental parameters of sound, even if one is thinking of mapping the sonification in musical terms (say musical pitches and orchestral instruments), as data narratives (Siu et al. 2022), or even as part of virtual audio environments.

At the University of Oregon, where students and faculty build their own digital musical instruments, compose, and perform on these instruments as part of a digital musical practice (Stolet 2022), we often rely on five sound parameters in mapping data streams. I like to state them as Frequency, Amplitude, Timbre, Location, and Duration, or simply FATLD. As John Cage would later describe in a 1957 lecture, sound parameters have envelope shapes — a frequency envelope, an amplitude envelope; yet, an envelope describes the temporal changes of sound, changes of one or more sound parameters. Certainly, there isn’t anything wrong with adding Envelope as a sound parameter, making the acronym FATLED. Or maybe FDELTA?

Regardless of the arguments around what should or should not be included as a sound parameter, these five, if not six, fundamental sound parameters are critical to mapping in data sonification. Sound is the carrier of information in sonification, the "path of information exchange, not just the auditory reaction to stimuli” (Truax 2001: xviii). Below, I describe each sound parameter and provide sound examples. The examples have less to do with communicating a message and instead highlight a given parameter. Each example is driven by a pseudo-random number generator controlling the given parameter while all other parameters remain static. The goal of listening is to hear the isolated sound parameter.

Frequency is often described as the periodicity or the number of vibrations in a second. When one plucks a string, the number of times that string vibrates in a second corresponds to its fundamental frequency, and if we hear that sound, we may even be able to describe the vibrations as a musical pitch. For example, the musical pitch for concert tuning is A440, or A is equal to 440 cycles per second (cps). You can think of pitch as perceived frequency, even though a musical note contains many more frequencies than its fundamental or base pitch. The human ear can detect (at its best) a range between 20 Hz to 20,000 Hz.

Amplitude is an attribute of a soundwave and refers to the "maximum displacement" or height of the wave (Pierce 1983: 41). If we have two sounds with the same shape (i.e., frequency and timbre), a sound with a larger amplitude will sound louder and the smaller amplitude will sound quieter. Amplitude refers to the quality of the sound, while loudness is our perception of the quality of the sound. Our experience of acoustic sound correlates energy with amplitude. For example, if you strike a drum harder you transfer more energy into the drum surface, causing the drum to vibrate at a greater amplitude, which causes larger variations in air pressure. When those pressure waves hit our ears, they transfer more energy onto our eardrums.

Timbre is the quality of sound that makes the sound unique. While frequency and amplitude play a role in timbre, sounds without a clear pitch, like cymbals, can diverge in timbre. Timbre also consists of additional factors. As University of Oregon musicology professor Zachary Wallmark describes, there are "physical, perceptual, and social qualities of timbre" (Wallmark 2022). So while the physical makeup of an instrument can make it unique to other instruments, a listener can "extract the pattern of a sound" based upon its timbre, and "timbre is perceptually malleable between people", who are "embedded within specific historical and social contexts" (ibid.).

Sound comes from somewhere. Location is the position of the sound in a space and in relation to the listener in space. When we listen to an acoustic bluegrass group (no amplifiers), the musicians are arranged in physical space, with sounds emanating from their instruments. By changing our position, or by rearranging the musicians, the location and the balance of the sounds change.

Duration is the length of a sound. In music, there are specific values that describe a sound's duration, for example, a quarter note is a sound that is to be played for one beat in length. Musical duration is dependent upon tempo, but sounds in sonification may not have a tempo, unless sound events are synchronized to data values that have a periodic, or regular, rate. Because duration in some way is tied to our audible perception of the sound, it is important to note that sounds have an amplitude envelope, or shape, which changes how we might perceive the length and character of the sound. A snare sound, for example, is a short sound. The sound is loud for a short period of time but quickly dies off.